The leadership gap in statistics – where are the women?

When 13-year-old Mercy Kanyuka, one of three sisters raised by a single mother in rural Malawi, decided to pursue her secondary education, she wasn’t aware that she would be paving the way for a future generation of women leaders in Africa. Particularly skilled in mathematics, Mercy went on to achieve considerable success in the early 1980s at university, battling cultural stereotypes stacked against women.

A few years later, she took up her first post at the National Statistics Office (NSO) of Malawi as a logistical choice balancing family priorities, rather than a career-oriented move. Over the years, she climbed the professional ladder to the highest rank in this institution, becoming the country’s first female Commissioner of Statistics.

Indeed, less than a quarter of top leadership positions (Director General, Chief Statistician or the like) among national or federal statistical offices (NSOs) worldwide are occupied by women. This share ranges from about 16% in Africa to almost 30% in Europe, Latin America and the Caribbean (Figure 1.)

The underrepresentation of women in NSO leadership resembles the overall labour market trend where the share of women in corporate management positions stays below the “glass ceiling” of 28%, despite relatively higher female presence in total employment (38%).4 In addition, female careers start to taper off around the time when the costs of raising a family and balancing personal and professional lives are disproportionately borne by them. A return to the workforce, if it happens, doesn’t pave way for a fair “catch-up” compared to men, who continue on a linear path. 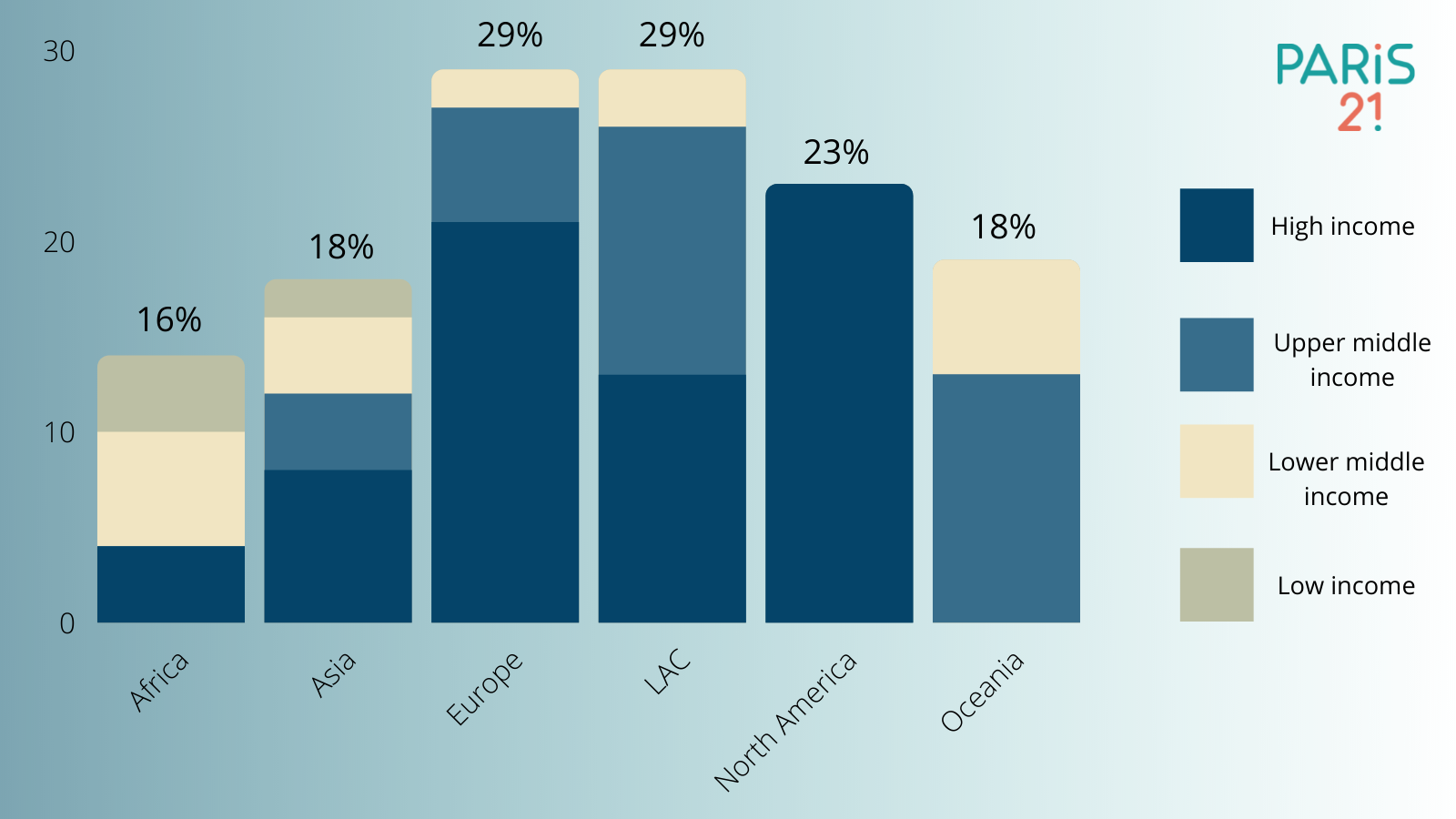 Two additional factors drive a limited representation of women among NSO leadership. One is the low share of young women taking up STEM subjects at universities5, contributing to an unbalanced female representation in careers in related to AI, computer science or engineering across the board – in private corporations, public sector, or non-profits.6,7 This reduces the pool of women in statistics from the source of the human-resource pipeline, and, if this historic trend continues, women will not be well positioned to capitalise on advancements in technology to assume more leadership roles in the future.

A second reason has to do with fact that NSO heads, beyond their technical and managerial merit, are often political appointments. In politics, too, we can observe a systemic male overrepresentation, with women occupying only 21% and 25% of ministerial and parliamentary positions, respectively.8

Tackling education and workplace obstacles is possible with proactive institutional policies and eradication of deep-rooted beliefs and harmful norms at each stage of women’s professional trajectories argues Martine Durand, who led an illustrious career at the OECD spanning 36 years. Starting out as a junior economist, she retired holding the rank of Chief Statistician.

The importance of an enabling workplace policy was also mentioned by Shahuda Aishath, Chief Statistician of the Maldives National Bureau of Statistics, who notes that the public sector is likely to attract women seeking predictable hours and stable contracts. Recalling her early fascination with the deployment of a national census in an archipelago of 1000+ islands, Shahuda, while emphasising the role of passion and ambition, added that advancing female careers comes with strings attached.

This takeaway was reaffirmed in all our conversations: to reach the highest decision-making level, successful women needed to walk a difficult tightrope, advancing professionally while often juggling care responsibilities and learning both to navigate and to challenge the status quo when entering a male-dominated arena. 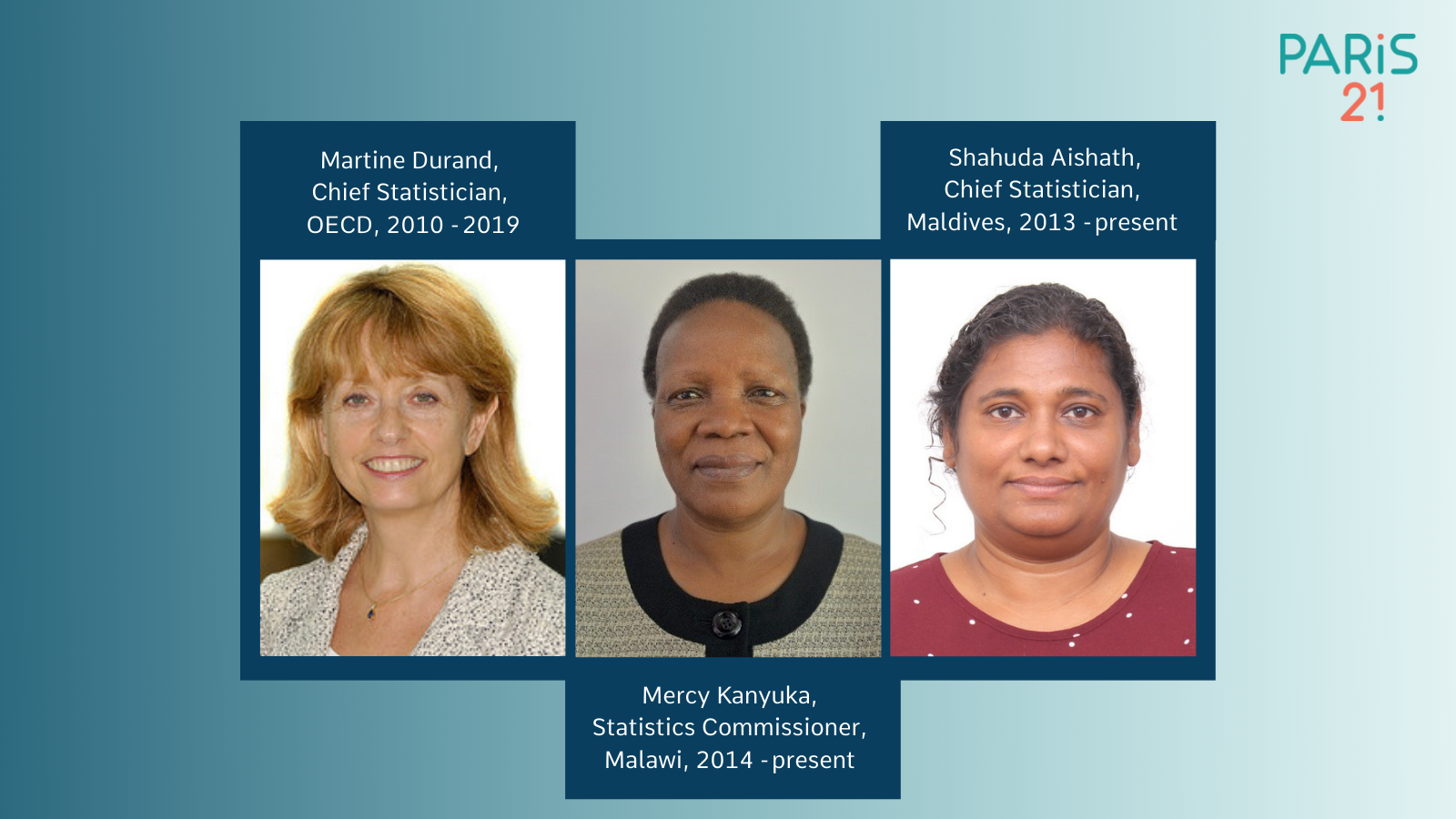 Empowering women to take on leadership roles is not simply a matter of equality or representation. Women leaders, with their diverse experience, ideas and perspectives have led substantive reforms and improved the performance of NSOs.

In Malawi, constituting gender-balanced teams of field enumerators and managers to conduct household surveys has been an intentional and consequential practice adopted by Mercy during her time as Commissioner. She noticed how women respondents were likelier to respond to women enumerators, making the data collection more complete and representative.

In the Maldives, Shahuda played an instrumental role in getting the statistical bill to the parliament. She advocated for the importance of a strong legal framework for official statistics to ensure professional independence of the national statistical system and to put safeguards on statistics from undue pressures.

At the OECD, Martine’s boldest legacy was bringing a “people-centred approach to statistics across the board, not just social statistics”. In the aftermath of the 2008 economic crisis, noticing the ineffectiveness of traditional economic measures in predicting and addressing market and social failures, she collaborated with world-renowned economists to explore new ways to measure inequalities and societal well-being. Motivated by her belief that the GDP fails to capture all aspects of people’s lives, Martine founded the OECD’s Better Life Initiative 9,10 , as well as a set of well-being indicators that continues to reflect people's realities in a granular way.

Inviting more diverse experiences and backgrounds to the decision-making table can be catalytic for internal change and innovation among organisations,11,12 which eventually benefits both men and women. But before equal chances and opportunities can be enjoyed by all women and girls, those that are entering the labour market need guidance and mentoring.

For the future leaders in statistics, the importance of role models cannot be overstated. Martine still recalls Janet Yellen, the current US Treasury Secretary,  who, in a meeting at the end of her term as Chair of the OECD Economic Policy, took time to acknowledge each and every member of the OECD team that had supported her during her mandate. This simple act of recognition from a senior role model had a lasting impact on Martine’s own leadership style as a future trailblazer in her field.

The Generation Equality Forum, concluding in Paris just a week ago, placed a bold focus on advancing women’s leadership and their participation in decision-making.13 Such high-level initiatives are an important tool to increase visibility around the role and potential of women leaders to drive change in culture and society. For NSOs, this new agenda presents an opportunity to recognize the achievements of women serving in top management, and their role in paving the way for a more gender equal future.

It is vital that today’s young women, just like Martine, Mercy and Shahuda before them, can envision themselves as leaders in the field of data and statistics, and especially of these important institutions.

SUBSCRIBE  to our newsletter to stay informed about PARIS21's publications and news from the global development data and statistics community.

gender statistics
Leveraging quality data and data planning to impro(...)
Data is a key constituent for improving the condition of women worldwide, but gender data gaps persist and demand deliberate actions and strategies. In March 2022, the national (...)
Africa
In the media: Africa must leverage partnerships to(...)
In the latest issue of the online journal Africa in Fact, journalist Raphael Obonyo interviewed experts, including Johannes Jütting, Executing Head of PARIS21, about Africa’s(...)
climate change data
Highlights of the 2022 Spring Meetings - Data ecos(...)
The two-day virtual 2022 PARIS21 Spring Meetings focused on the topic of climate change data. The meetings introduced the concept of a climate change data ecosystem (CCDE), e(...)
ESG investment, sustainable development and greenw(...)
In recent years, environmental, social and governance (ESG) investment has emerged to play a significant role in the sustainable development sector. At the same time, critici(...)