Financial commitments to statistical development rose for the fourth consecutive year since PARIS21 began measuring aid to statistics through its Partner Report on Support to Statistics (PRESS).

Financial commitments to statistical development worldwide for the period 2010–12 amounted to roughly US$ 2.3 billion, although these figures remain quite low since they represent less than half of 1% of ODA. This includes activities committed prior to, but still active during, the rolling three-year reporting period. This global figure is up dramatically since the first PRESS Round in 2008, as illustrated in Figure 1. 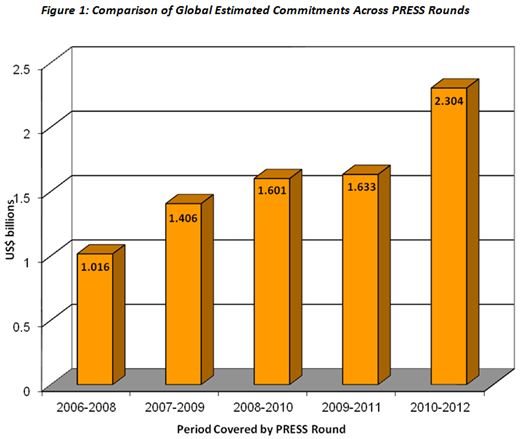 The African continent continues to attract the largest share of support for statistics, totalling 46% of all commitments. Asia–Pacific received 25%, Latin America and the Caribbean 11%, and Europe 6%. The remaining 12% were committed to global, non–country-specific projects and programmes.

Although commitments to statistics have increased significantly in recent years, challenges in the delivery of that aid persist.

Support to statistics is highly concentrated: while the 2012 PRESS exercise captured support to 111 countries, a mere 15 combined to equal 40% of total worldwide commitments (i.e., including unallocated support) and 55% of total country-specific commitments (i.e., excluding unallocated support). Of particular concern is the plight of small island developing states (SIDS). Among the many development challenges resulting from their small population size, SIDS often face the additional burden of being “aid orphans”. In fact, no SIDS countries appear among the top 15 recipients. (Dominican Republic is 24th in the list, followed by Haiti at 38th.)

A large share of global support to statistics comes from a very small number of providers. The top four providers of development co-operation in statistics (European Commission, World Bank, UNFPA, and United Kingdom) provided 73% of total commitments. Aid to statistics is nevertheless highly fragmented, with many recipient countries receiving too little aid from too many donors.

A decreasing percentage of aid projects/programmes are aligned with the recipients’ nationally agreed priorities. Forty percent of projects/programmes were confirmed as being aligned with National Strategies for the Development of Statistics (NSDS), down from 52% in the 2011 PRESS Round. To understand these figures, it is important to recognise that 87% of countries in Africa are either implementing or designing an NSDS, 76% in Asia–Pacific, 75% in Latin America and the Caribbean, and 83% in Europe.

However, encouraging trends are also emerging. 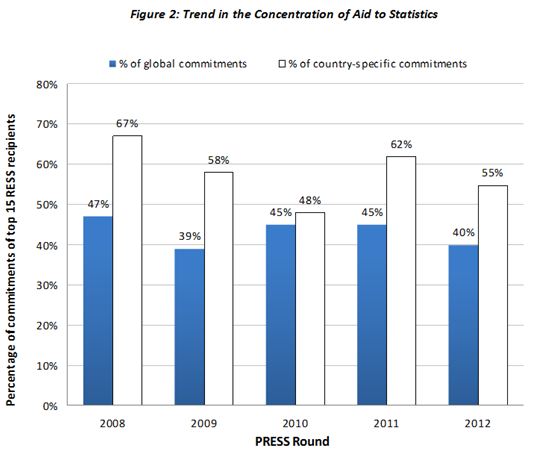 The share of aid to statistics relative to total Official Development Assistance (ODA) has increased. Over the most recent period for which data are available (2008–10), this share rose to 0.28% of ODA, up from 0.19% over the period 2007–09. This increase is likely due to a growing prominence of statistics in development co-operation programmes coupled with a drop in overall ODA figures because of the global recession.

The full PRESS 2012 report is available for download below, along with the accompanying data. PARIS21 also delivered a presentation highlighting PRESS results specific to Asia-Pacific, at the request of the Partners for Statistics Development in Asia-Pacific.